Book Review: One Song Away by Molli Moran 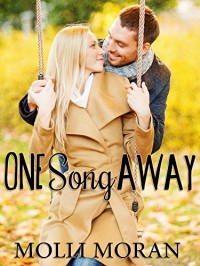 Lets start with what I enjoyed about this book. The supporting cast is definitely a high point in this story for me. The don't-take-shit-from-anyone attitude of Sloane was a breath of fresh air against the under confident Sophie-Claire. Even when Sophie-Claire didn't want to be pushed, Sloane knew how to take care of her friend by taking her phone away when she was wallowing over texts and making her go out and let loose instead of sitting at home. This is what a best friend should be.

Coop was down to earth and seemed like a pretty typical guy. His revelations towards the end of the book aren't surprising but the whole scenario seems far fetched to me. There is so much history between Sophie-Claire and Coop that I found it impossible that neither knew how the other felt. As a reader, everything that is done and said by Coop confirmed his attraction to Sophie-Claire and the fact that she remained clueless frustrated me immensely. Based on the story line, these characters were best friends for several years, reconnected and talked every night but somehow their feelings never came up? I'm not buying it.

I really want to connect with Sophie-Claire as a character, but I couldn't relate to her incessant insecurities. I've had my fair share of low self-esteem moments (haven't we all?), and definitely could relate to the presumably unrequited love moments, but I feel like Sophie-Claire's character is a bit over dramatic. She is written as willfully ignorant of the situation around her, but claims to spend lots of time analyzing it. Those two things, in my head, don't add up.

All in all this book was just okay for me. The settings and supporting cast made this a 3 star read for me since I couldn't connect with the main characters.