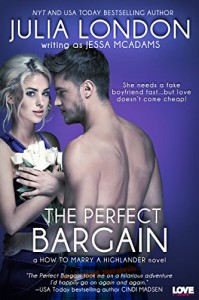 As if being newly single isn't brutal enough, Sloane Chatfield's friends are getting obnoxious about setting her up. When Sloane insists she's waiting for a certain sexy fictional Highlander to come along, her friends surprise her with a trip to Scotland to find her a new boyfriend. She'd rather have a root canal. But if she can find a Highland hunk to "break her heart" before her friends arrive...

In a remote Highland village, Galen Buchanan is struggling to keep the family pub afloat. Everything is falling apart, he's running out of money, and now there's an opinionated American lass parked at his best table, driving him mad. But then Sloane asks Galen to be her pretend Highland boyfriend...and offers him enough money to save the pub. It's only for a few days, he figures. What's the worst that could happen?

I've been in a reading slump as of late for various reasons, one of them being I am just not loving any of the books I've picked up. Unfortunately this gem is a part of that group. The premise was promising- desperate American girl tries to get adorable Scot to be her pretend boyfriend to appease overbearing friends, what could possibly go wrong?

I enjoyed the banter between Sloane and Galen a lot. Navigating a new relationship that was built out of convenience is never easy, but their lighthearted banter and snarkiness kept it fun. My only complaint is that both characters seemed pretty stereotypical: the "uptight American who works too much" and the "laidback Scotsman who calls everyone lass" is a bit overdone and outdated. I would have preferred a little diversity in the characters, but at least they had chemistry.

Sloane's friends were a bit vapid in my opinion. None of them really seemed to have good intentions and their personalities seemed passed over by the author. It is one thing to try to encourage a heartbroken friend to get back out there, but their motives seemed impure at best. We never really got to know her friends though, so it could be the lack of characterization that made it feel shady.

There were a few unexpected moments that kept the story moving right along and I finished it in one sitting. I recommend picking this up when you're in the mood for a lighthearted romance.